In June 2012 I was admitted into hospital due to severe endo pain after AF, after scans it was found I had 2 large endometriomas on my left pelvic area and behind my uterus. The consultant who knows my history was treating me and knows how much I would like the chance to have my own child, she sent a fax to to the hospital I am under treatment for explaining that I need urgent surgery …….. yet 6 months later  am still waiting. What is urgent to me must differ from NHS thinking.

6 months of pain, 6 months of fatigue, 6 months of disturbed sleep, mood swings, vomiting and bowel problems. In August I had an MRI where is shows in 2 months both endometriomas grew to over 8cm, and a 3rd now on my right ovary, the only ovary I have left. Along with this my uterus, bladder and bowel are stuck together with my bowel and bladder covered in noducles/adhesions. Yet still no surgery.

I was referred to a surgeon who I met in October, we had a frank and open conversation about my disease and the options for surgery which I appreciated yet still waiting. He put me on treatment for another 3 months to see if it makes a difference.

In November after having AF I ended back in hospital with severe endo pain, also an infection, I was on IV antibiotics for 24hrs, several tests done, yet the following eviening I was discharged, no answers on what the infection was, no feedback on the results from the tests and genaerally told to cope as surgery had to be planned.

In the car home I was distraught I had been made to feel I was making this up to have surgery early which was not the case, i don’t want urgent surgery, I want it planned as last time I had emergency surgey well 12months down the line I am worse now than I was then.

Since this last flare up of endo I have had time to think, time to reflect and decided enough is enough. I am fed up of being fobbed off, endometriosis not taking seriously and only time action is taken is when it gets to a critical point. The pain is getting to me not just physically but emotionally amd mentally and something has to give. I have now involved PALS (patient advisory liaison service) who is looking into my case, I have requested my case notes from the hospital as I an not going to sit here and take it form the NHS.

I believe that now I have lost my fertility completed, my right ovary is lost, the lack of action from the NHS has resulted in my endo growing more and more. I believe if I had surgery earlier I would not be as sick as I am, and I may still have a chance to bear my own child.

It is wrong the way we are treated, made to feel it is all in our head

It is wrong that we have to fight for treatment

We all believe we fight like a girl, well watch this space as this girl is ready for the fight and its a fight I will win. 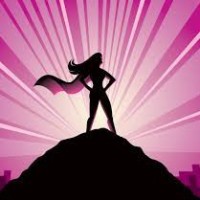